Our Mission: The Hawes Trail Alliance is a non-profit organization that was formed to help maintain, enhance and expand the Hawes Trail System to be enjoyed by bikers, hikers, and all outdoor enthusiasts. 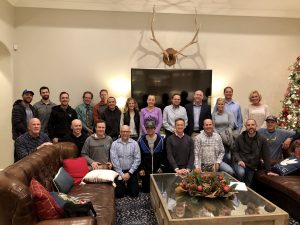 What We Have Accomplished​

Since December of 2018, our team has worked hard to make Hawes a better place. We have worked with local legislatures, HOA’s, Community leaders, The National Forest Service, and Accomplished quite a bit!

Grant is currently employed by Empire Southwest, LLC, the Caterpillar dealer for the state of AZ and eastern California as the Real Estate & Development Manager and has been since March of 2005. He oversees and manages 20 locations throughout the Empire territory Responsible for all real estate acquisitions and dispositions for Empire Southwest. As part of his responsibilities with Empire, Grant is the present President of Power Marketplace Business Park Association in Queen Creek, AZ, and President of Empire Center Property Owners Association located in Mesa, AZ.

Grant has been involved in real estate for the past 30 years as a licensed principal broker, with active licenses in both Arizona and Utah. Grant is a founding member of Hawes Trail Alliance. Additionally, Grant served on the Mesa United Way Board of Directors from 2005 until 2015, and was Campaign Chairman in 2014-2015 fiscal year, also participated in leading the “Basic Needs Committee” while on the board.

He is an avid cyclist, participating in road, mountain, and cyclocross disciplines, having achieved a USAC category 1 rider status in mountain, category 3 rider status in cyclocross and road. Grant also enjoys hiking, and running as well, having placed on the podium in the Phoenix/Mesa 10K race for the previous 3 years. Grant is married to Mindy Jolley Taylor and they have four married children with 10 grandchildren.

Tommy Stapley has over 20 years of real estate and management experience and is a Managing partner and Founder of Treehouse Communities. He is a Founding Member of Invitation Homes and oversaw $1B in capital improvements across 50,000+ homes. Tommy has been involved in manufactured home community portfolio management for over 15 years.

Tommy is a founding member of Hawes Trail Alliance and also presently serves as a member of the Visit Mesa Board. He also is the Vice President of Manufactured Housing Communities of Arizona. Tommy has served on the City of Mesa Housing and Community Development board as well as the Building Board of Appeals.

He is an avid skier and biker. When there’s no fresh powder, you can generally find Tommy exploring the Tonto National Forest most mornings of the year on his mountain or gravel bike – laughing and smiling. Tommy presently lives in Mesa with his wife of 24 years, Leigh. They have three children.

Michael is currently a principal of Cowley Norberg Investments (CNI), a private real estate investment and lending company based in Phoenix, AZ. CNI manages over $130mm in outside investor capital. Prior to joining CNI, Michael was the principal and founder of Arete Capital, LLC an Arizona-based, real estate private equity company. He was also the COO for Cornerstone Homes, helping to grow the Arizona homebuilder to close more than 250 homes per year.

Before joining as a partner of Cornerstone Homes, Michael also served in various Sales Management and Sales positions with several high-tech companies, including Niku Corporation, Baan, Netscape, and Novell/WordPerfect. He began his career at Ford Motor Land Development in Dearborn, Michigan as a Financial and Business Planning Analyst. Michael is a founding Board Member of Hawes Trail Alliance in Mesa AZ. He also serves on the Board of Directors for Novo Power (Arizona’s only Biomass plant located in Snowflake, AZ). Michael is a graduate of Brigham Young University and holds a bachelor’s degree in Finance.

Michael loves movies, friends, and a great mountain or gravel ride in the desert or mountains. He resides in Mesa, AZ with his wife of 32 years, and they have four children and two grandchildren.

Crystal Petrocelli is an avid outdoor enthusiast who grew up running wild in the forested mountains of Coastal California. After graduating from Arizona State University with a Photojournalism degree, she ventured to the far, FAR eastern outskirts of Mesa drawn by the majestic beauty of Red Mountain. Drawn to the nearby Hawes Trail System and accompanied by her sport-loving husband, Dominic, she quickly jumped into mountain biking and trail running and loved them both.

Crystal has tackled such races as the Pass Mountain 25k run, Whiskey 50, Leadville 100, and 70.3 Ironmans. Crystal spends her summers in Crested Butte adventuring in the high alpine and volunteering with the oldest mountain bike club in the country, Crested Butte Mountain Bike Association. After getting a taste of building trails in Colorado, she was ecstatic when the Hawes Trail Alliance was formed and has been heavily involved from day one.

Just like her fellow hardworking and trail-obsessed HTA team members, she looks forward to making the Hawes Trail System the best in Arizona!

Dave Welsh is an Associate Professor in the W.P. Carey School of Business at Arizona State University. He currently teaches courses in the MBA program and works on academic research featured in media outlets such as Bloomberg BusinessWeek, Fortune, The Huffington Post, BBC News, and Psychology Today.

As an Arizona native, Dave started racing bikes in the MBAA series as a teenager and was immediately hooked. He loves everything on two wheels including XC racing, enduro, gravel, and road cycling. After completing his education, he moved to east Mesa specifically to be close to the Hawes Trail System. His wife Alisha is also an avid rider and they have two young girls who are now little shredders.

Dave has a passion for riding and developing epic trails and is committed to making the Hawes Trail System a premier outdoor recreation destination in the Southwest.

We don't have any inventory Now, Memberships Packages will be determined at a later date. Dismiss